Proximus decided to combine fixed, mobile, internet and TV services together in an all-encompassing new offer tailored to the customer’s needs. The idea is represented by a bountiful fantasy world in which all of the features of the pack are represented by fun elements like a special roller coaster, emoji air balloons and huge popcorn boxes. The Tuttimus pack offers lots of advantages like separate mobile data volumes for every family member and one favourite app free of charge per mobile plan. 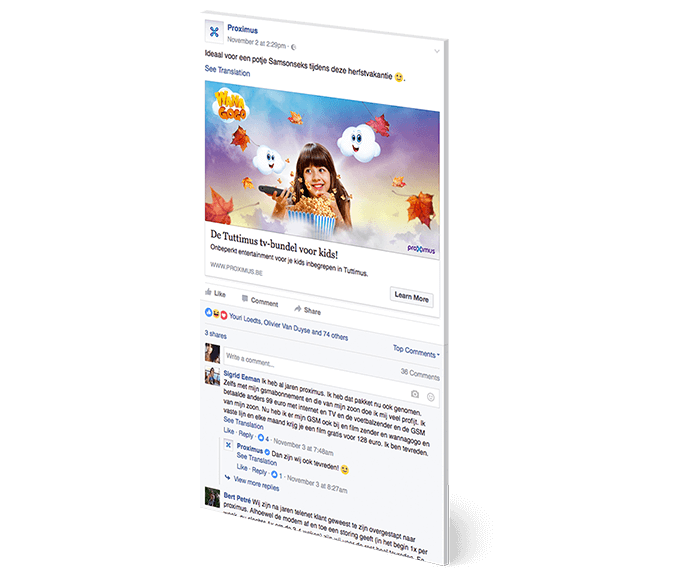 Our contribution to this success

Launched on October 17, the online campaign started with a 35” video, sponsored on Facebook as well as Instagram, followed by a 15” video for the second wave. Next to that, we also promoted the fact that Tuttimus offers data for one favourite app on some of the available apps on offer: Facebook, Instagram and Twitter.

Easy on the eyes and fun, the campaign got noticed so fast that by October 18, Tuttimus got selected as campaign of the week by Media Marketing. In the weeks following the launch, we kept things interesting by publishing posts linking the Tuttimus offer to always-on content such as Halloween, Movember, football, the release of a new series on Netflix, the fall holidays, and world television day.

Creativity is
intelligence
having fun.