Nowadays, on top of people living in a designated area, you can also reach people who are just passing by an area and notify them of things happenning nearby. All it takes is mastering geo-targeted ads on Facebook! For example, when Proximus boosted its network by installing new antennas, we created awareness using geo-targeting in a local awareness Facebook campaign with specific visuals around 23 locations in Belgium. This campaign reached about 145.000 people located nearby the new antennas, thanks to the Facebook ads feature allowing to target ‘everyone in this location’, which is based on the current city people specify in their profile but also on collected device and connection data.

But geo-targeted ads have more potential than simply raise awareness. Such ads can indeed be part of a larger strategy to convert awareness into interest, desire, and ultimately, purchase. For example, when Proximus opened a pop-up store at the Meir in Antwerp, not only did we target people within a certain radius with appealing Facebook ads: we also showed them the way to the store straight from the ad. An innovative way of attracting new customers since adding this feature can spark interest and immediate action. 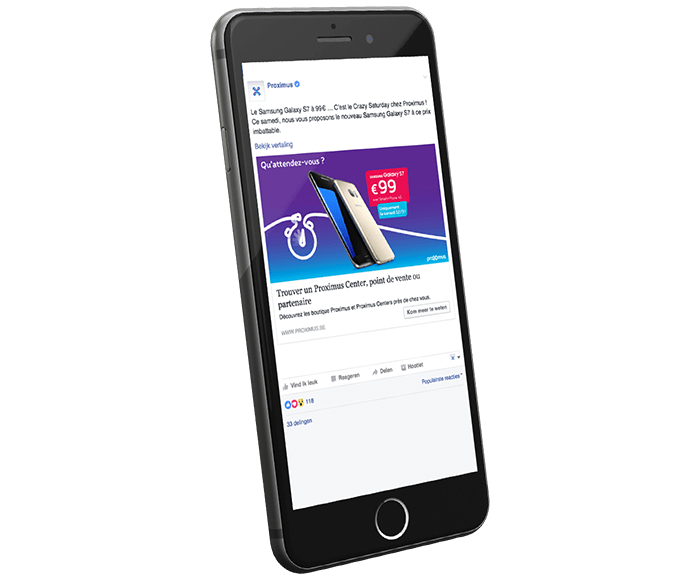 Pushing an offer with geo-targeting

When Proximus launched a one-day limited offer last year for the release of the Samsung Galaxy S6, they only managed to sell 130 devices, after a mainly offline campaign (in-store displays and newspaper ads). This year however, we took their campaign to the next level by pushing the offer on Facebook (and scrapped the offline ads), which ultimately resulted in 1158 devices sold in one day. Out of the four ad sets we ran for a total media budget of 1278€, one included a series of ads that geo-targeted people within a 1-mile radius around the different shops, and showed them the way on Google Maps. A little over 96k people were reached around the 23 locations on the day of the offer, for an advertising budget of 403€. In total, over 428k people were reached by ads from the four ad sets, either in the days before the action or on the day itself.

Social media is not a  media.
The key is to listen, engage,
and build  relationships.